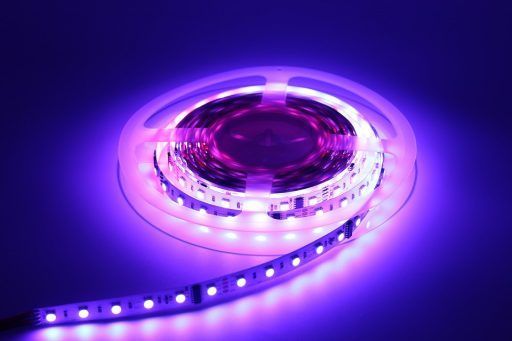 Get infinite possibilities and colour combinations, plus a white light, with one of the top 10 best RGBW LED Strips.

How does an RGBW LED strip work? What’s the difference between RGBW and RGB LEDs?

The best thing about RGBW LED strips is that it has the same colour palette as RGB models, but adds, on top of that, white light in different tones, cold and warm.

As for the rest of the features, they work in the same way as other LEDs. They come in different voltage option, from 110-120V to 5V, and you will find models for the inside of your house and the outside, with some of them being waterproof, with IP65, IP67 and IP68 protection.

For power, RGBW LED strips offer several options: plug-and-play, adapter or transformer, USB, or batteries. Most of them usually come with an adhesive backing to makes it quite easy to attach the strip. If the LED strip will be exposed to the weather or water, it might be a good idea to use a stronger fixation, like silicone or nails.

Our last note has to do with the price of RGBW LED strips. The basic models are generally cheap, with the price increasing slightly if you move up the range and pick LEDs with advanced features, but they do not consume too much energy.

If you want to have beautiful scenarios of light and colour, and the ability to illuminate a room properly, RGBW LED strips are a perfect choice. They offer the option between static light or flashing light, and you will be able to program changes of colour with a timer. Just imagine what you can do.

To get the full experience, you should consider an RGBW LED strip with Wi-Fi connectivity. You will be able to connect every parameter and activity with your smartphone! And for the icing on the cake, if you have a virtual assistant, such as Google Home or Amazon Alexa, you will be able to control your LED lights with your voice!

Prices depend on the features presented by the RGBW LED strip of your choice, but they are generally cheap. They’re also a great way of introducing yourself to smart lighting and home automation, so start now!

In addition to RGBW LED strip lights, we have in our online store:

The shades of white are always welcoming and cosy, so check out Read more

Picture this: having your home, your car, your garden and your pool Read more

With some multicoloured LED strips, you’ll be able to design beautiful and Read more

Bring out the best of your home, garden, pool, computer or even Read more